In this article, you’ll learn:

Suppose you have to filter out PII (Personally Identifiable Information) out of log entries that look like this HTML. We don’t want the following PII fields to show their values: email, social_security_number, date_of_birth

And the end result we want is:

I suggest you open the following reference web pages:

Figure out the Regexp

Copy the above string of input (gray box above labeled /Input HTML/into the “Your test string” box, and then let’s figure out a simple regexp to match an individual line.

The .*? syntax means to get the non-greedy match. In order to see this, let’s use this string below into the “Your test string” box (note, the text scrolls way to the right):

Notice that you see the correct result for the match.

And you’ll see this:

The Ruby docs for Class Regexp explain this:

Repetition is greedy by default: as many occurrences as possible are matched while still allowing the overall match to succeed. By contrast, lazy matching makes the minimal amount of matches necessary for overall success. A greedy metacharacter can be made lazy by following it with ?.

Match any of the 3 fields

How do we match any of the PII fields of email, social_security_number, date_of_birth?

The answer is to use alternation.

The vertical bar metacharacter (|) combines two expressions into a single one that matches either of the expressions. Each expression is an alternative. 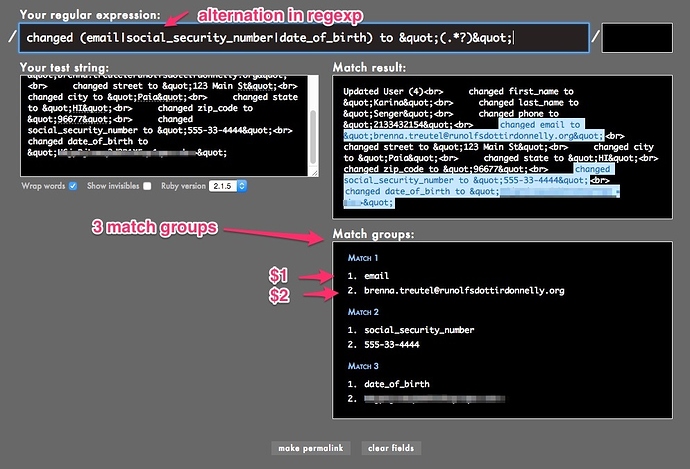 Experiment in the Console (Pry)

Open up your rails console (rails c) and paste the following 2 lines. This will set you up with what we’ve been testing in Rubular.

Then enter the following. Feel free to experiment!

Here’s the doc of the globals set by a regexp. These are thread-local and method-local variables. So they are safe in a multi-threaded environment. 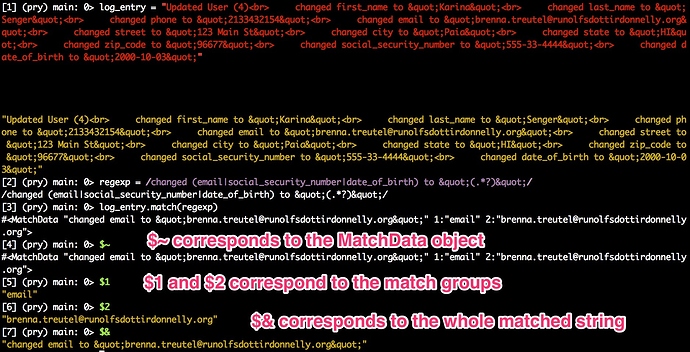 The $~ will come in particularly handy when we try to use gsub.

How Do We Get All the Matches?

$1 and $2 are not the most illuminating names for the capture group values. Ruby offers a way to give them readable names. Quoting the Ruby doc for Class Regexp:

Let’s try that in rubular first by copying this regexp into rubular: 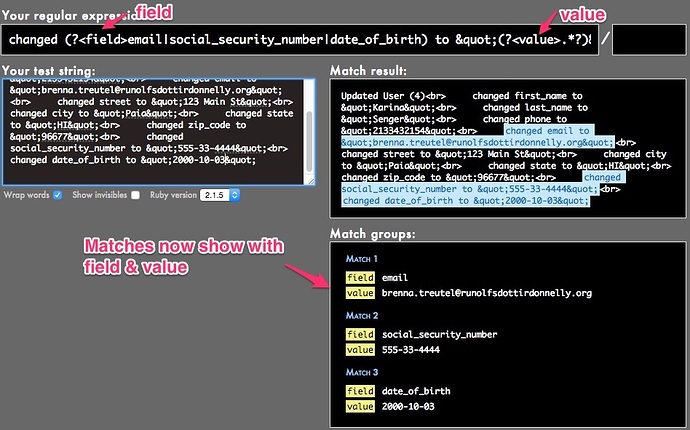 And then try this in the console: 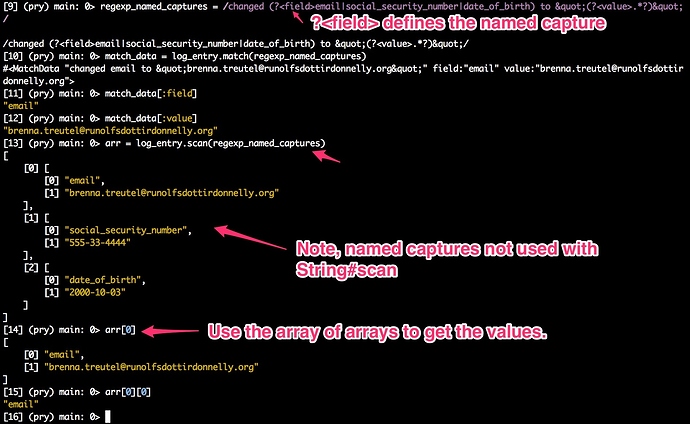 Now, back to the task at hand, which was to convert the original log entry with PII so that the PII is redacted. We’ll change the lines to something like this:

Let’s take a look at the documentation for String#gsub

If replacement is a String it will be substituted for the matched text. It may contain back-references to the pattern’s capture groups of the form \d, where d is a group number, or \k

And that results in mission accomplished!

Suppose you want to use the block syntax of String#gsub. Given the use case in this example, there’s no particular reason to use it. However, you might come across a use case where you’d like some logic in the bock to determine the substitution value. Here’s how you do it.

In the block form, the current match string is passed in as a parameter, and variables such as $1, $2, $`, $&, and $’ will be set appropriately. The value returned by the block will be substituted for the match on each call.

To use the block syntax with named capture groups is not exactly obvious.

You might think that the value passed into the block is the match data. Instead, it’s the full value of what was matched.

That’s not what we want. We want to show the field that was redacted.

Maybe we can use the same syntax as the non-block form:

The solution is that you have to use the globals mentioned above, like $1.

But what if you want to use the named capture groups?

Then you have to use the $~ which gives you the MatchData.

This is a companion discussion topic for the original entry at http://www.railsonmaui.com//blog/2015/01/25/masking-pii-with-ruby-gsub-with-regular-expression-named-match-groups/
Doroock September 3, 2015, 10:10pm #2

Nice Article, thanks for that!